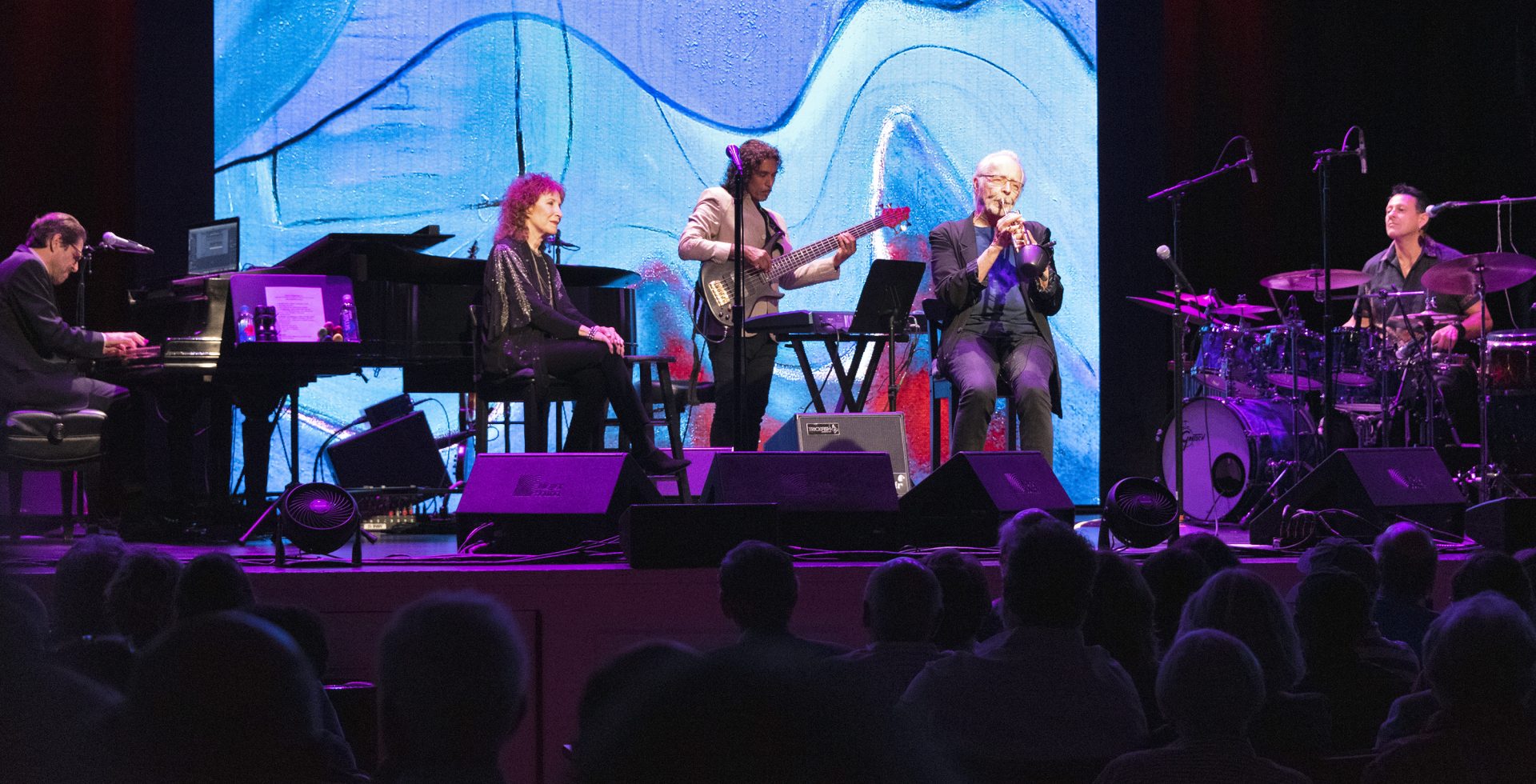 Creator and innovator, musician and producer, artist, and philanthropist, Herb Alpert is a man with a profound passion.

Born in Los Angeles, the future trumpeter came of age in a house filled with music. At the age of eight, he was drawn to the trumpet in a music appreciation class in his elementary school.

“I was very fortunate that I had that exposure to music and was encouraged to stick with it. Years ago, when the arts programs were cut out of our public schools, so many kids stopped having that kind of opportunity.”

A legendary trumpet player, Alpert’s extraordinary musicianship has earned him five #1 hits, nine GRAMMY® Awards, the latest from his 2014 album, “Steppin’ Out,” fifteen Gold albums, fourteen Platinum albums and has sold over 72 million records. Herb Alpert & The Tijuana Brass propelled his sound into the pop music limelight, at one point outselling the Beatles two to one. In 1966, they achieved the since-unmatched feat of simultaneously having four albums in the Top 10– and five in the Top 20. Herb Alpert also has the distinction of being the only artist who has had a #1 instrumental and a #1 vocal single.

Some of Herb Alpert and the Tijuana Brass’ fourteen Top 40 singles include; The Lonely Bull, Mexican Shuffle, Spanish Flea and the GRAMMY®-winners “A Taste Of Honey” and “What Now My Love,” and the #1 hits “This Guy’s In Love With You” and “Rise.” In 2016 the Herb Alpert Presents record label released 30 deluxe re-masters of the entire TJB catalogue plus all of Herb’s solo albums from the ‘70s, ‘80s, ‘90s. In all, Alpert has recorded over forty albums and produced for many other artists, including Sergio Mendes & Brasil ’66, Stan Getz, Michel Colombier, Gato Barbieri and Alpert’s wife, GRAMMY winning vocalist Lani Hall, to name a few.

As an industry leader, Alpert’s commitment to artists with personal vision guided A&M Records (with partner Jerry Moss) from a Hollywood garage operation into one of the most successful independent record labels in music history that started in 1962 with Herb Alpert and the Tijuana Brass. Stars including Janet Jackson, Quincy Jones, Sergio Mendes & Brasil ’66, Stan Getz, Cat Stevens, Supertramp, The Carpenters, Carole King, Sheryl Crow, Peter Frampton, The Police and scores of others that are evidence of the consistent quality and diversity of the A&M Records family.

In 2006, Alpert and Moss were inducted into the Rock and Roll Hall of Fame in recognition of their accomplishments and are a part of the Grammy Museum’s ”Icons of the Music Industry” series. In 2013 Herb Alpert was awarded The National Medal of Arts Award by President Barack Obama for his musical, philanthropic and artistic contributions.

Herb Alpert has continually explored other artistic ventures, always acknowledging a connection between music and visual art in his creative process. A painter for over four decades, Alpert’s bold, abstract expressionist canvases have been exhibited internationally and are a part of the permanent collections of MoCA (Museum of Contemporary Art) in Los Angeles, the Tennessee State Art Museum in Nashville, the Kranzberg Arts Foundation in St. Louis as well as the University of California Los Angeles. Herb’s work has been exhibited in galleries around the U.S, Europe and Asia.

A sculptor for over three decades, Alpert has installed his lyrical sculpture and his massive, bronze Totem sculptures on public display throughout Los Angles, New York City, Nashville Tennessee, and most recently a permanent installation at the Field Museum in Chicago.

Alpert explains, “There is a certain satisfaction and energy that comes from playing the horn – a feeling that I am really in my element. I am passionate about what I am doing, whether painting, sculpting or playing the trumpet. I am just trying to create whatever comes out in the spontaneity of the moment.”

Broadway theatre is another arena in which Alpert has enjoyed success. His producing credits include the Tony Award/Pulitzer Prize-winning production of Tony Kushner’s Angels in America, Jelly’s Last Jam, Arthur Miller’s Broken Glass, August Wilson’s Seven Guitars and The Boy from Oz.

With his desire to bring the arts back to young people, the Herb Alpert Foundation is helping to change the educational environment.  The Herb Alpert Foundation supports a number of educational, arts and compassion oriented programs, dedicated to serving young people to help them reach their potential and lead productive, fulfilling lives and to support their unique creative energies and special talents. HAF supports young people to live free from prejudice and, with its many programs, nurtures a capacity for empathy, compassion, mutual respect, tolerance and kindness.

The Herb Alpert Foundation, which Herb created with his wife Lani Hall Alpert in 1985, was instrumental in establishing the Herbie Hancock Institute of Jazz graduate program at the UCLA Herb Alpert School of Music. The UCLA Herb Alpert School of Music, founded with an endowment from the Foundation in 2007, aspires to educate the whole student through productive collaborations between performance and scholarship and preparatory training for a broad range of careers in music.

In 2008, through an endowment from the Foundation, the school of music at CalArts was named for Herb Alpert. This gift continues to support music scholarships, endow three faculty chairs, and fund faculty programs at a school known for its rigorous training in a variety of musical styles and cultures. Continuing their support of arts education, the Foundation created an endowment in 2016 to provide music majors at Los Angeles City College tuition–free attendance, additional private lessons, and further financial aid to enable them to succeed in their community college experience. Over the past nine years Herb has come to the rescue of the legendary Harlem School of the Arts, establishing an endowment that not only prevented the school from closing its doors but has led to a major redesign of the campus, financial aid and the funds to thrive as a key arts destination for the community.

Over the past 25 years, 125 mid-career, risk-taking artists have received the Herb Alpert Award in the Arts, an award administered by the California Institute of the Arts (CalArts), which also houses the Herb Alpert School of Music at Cal Arts.

In addition to his on-going creative outlets in music, philanthropy and the arts, Alpert owns the noted Vibrato restaurant/jazz club in Bel-Air, California. He also continues to perform and tour across the country with his wife, Grammy-winning vocalist, Lani Hall and their band.

Herb’s priorities derive from the same sense of generosity and humility that has guided him through a long, illustrious career. In all of these ventures, there is a harmony not unlike Alpert’s music. A flowing of energy and sound, a dedication to quality, which sustains everything Alpert does. With more than 40 years of continuous philanthropic, musical and artistic activity, Alpert has established a legacy that reflects his firm belief that the arts can make a difference in the world and in the lives of each of us.

Two time Grammy Award-winning vocalist and producer Lani Hall started her singing career in 1966 as the lead singer of Sergio Mendes’s breakthrough group, Brasil ’66. She left behind her city roots in Chicago and for 5 years performed throughout the world. While Lani’s singing career took her on the road, she also focused on her writing—committing to the page her personal impressions of the world around her. Sergio Mendes further expanded her writing career by asking Lani to write the English lyrics for many of the band’s Brazilian songs.

In 1966, A&M Records signed Brasil ’66 and Lani met her future husband, music legend, Herb Alpert, who is also the co-founder of A&M Records. Herb and Lani married in 1973.

Lani has the distinction of recording more than 22 albums in three different languages (English, Portuguese and Spanish, and in 1983, she sang the title song for the James Bond film, Never Say Never Again. In 1986 Hall won with her first Grammy Award for Best Latin Pop Performance for her album, Es Facil Amar. Hall picked up her second Grammy Award as producer on Herb Alpert’s 2013 Grammy winning album, Steppin’ Out. Since 2006, Hall and Alpert have been touring with their band to sell out performances.

After establishing a successful solo career in music, and becoming a wife and mother, Lani began to explore new creative outlets for her writing. In the early 1980’s, while singing in Mexico City, she started writing in short story form. Her writing process is similar to her singing process in so far as she can visually see a song/lyric unfold before her, as if she were watching a movie.

Her debut book, Emotional Memoirs & Short Stories, compiles 10 short stories from 30 years of writing short fiction and true stories from her life—all woven together by a connecting personal narrative, with the city of Chicago as the backdrop. Her characters are intelligent, modern women struggling to navigate the uncertain waters of adultery, therapy, cosmetic surgery, postpartum depression and their own sexuality. Lou Adler describes Lani’s book as “free-form as a jazz piece weaving in and out of intriguing situations and indelible characters. She writes as she sings, with emotion and passion.” With the release of her audio book, Emotional Memoirs & Short Stories, Hall has mixed her two creative expressions to make one total experience. Her emotional narration at the forefront, Lani has placed a unique, musically scored soundtrack, creating an emotional landscape of music, to all 10 stories, making each chosen scene come to vivid life. Emotional Memoirs & Short Stories gives us a rare glimpse at the double-edged sword that is the life of an artist.

Since arriving in Los Angeles in 1988 from his native land of Sri Lanka (via Europe), Hussain Jiffry has become one of the most sought-after bassists in Los Angeles.

During the past twenty five years Hussain has become an in demand studio session player, songwriter, arranger, producer, engineer and music educator. He writes, arranges and produces various artists at his studio in Tarzana, CA. Hussain won a Grammy in January 2014 for engineering Herb Alpert’s CD “Steppin’ Out”.

Ricardo “Tiki” Pasillas is a drummer and multi-percussionist, and vocalist who has performed professionally for over a decade. As a teenager he won a Berkelee College of Music scholarship. Later, Tiki received the Latin stylist award at the Musician’s Institute in Los Angeles.